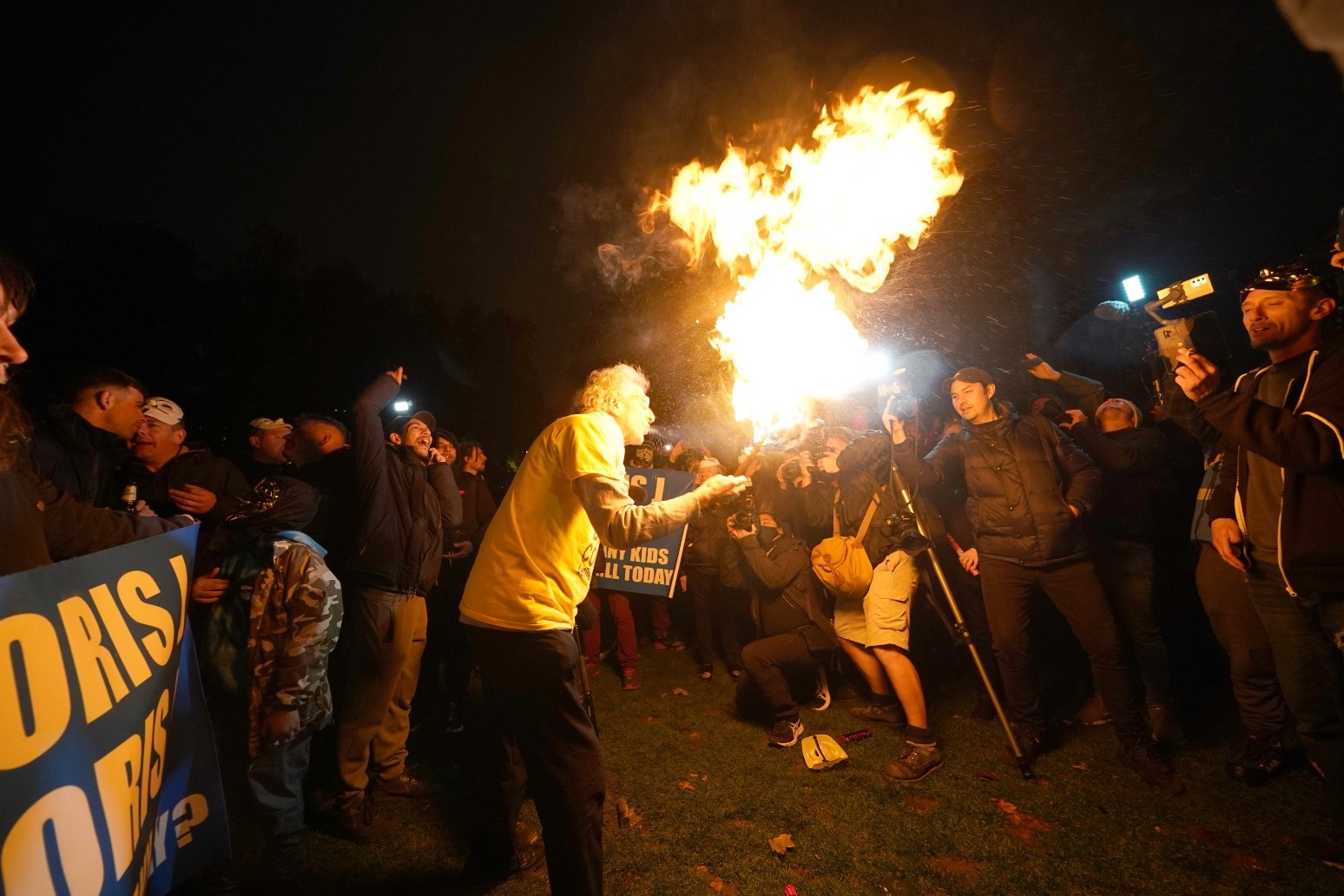 Twelve arrests have been made after hundreds of anti-establishment protesters clashed with police in Parliament Square in central London on Bonfire Night.

Protesters threw fireworks at police during the clashes – with eight officers needing treatment for injuries, the Metropolitan Police said on Twitter.

The Met said the injuries were “unacceptable”, adding the arrests were made “for a variety of offences”.

In a tweet, the force said: “A total of 12 arrests were made while policing tonight’s demonstrations across London. Those arrests were for a variety of offences.

“Eight of our officers were injured. This is unacceptable. The policing operation will continue into the evening.”

A crowd gathered to watch, with one member shouting “burn, Boris, burn”.

The protesters then moved to Parliament Square where they clashed with police wearing protective gear.

Many of the demonstrators taking part in the demo, which is known as the Million Mask March, held signs protesting against the coronavirus lockdown.

One, who gave his name only as Richard, from London, said the protest, which has taken place on November 5 for several years, was a “continuation” of the “anti-Covid” marches.

“It’s basically a continuation of the anti-Covid marches that we’ve been on since the beginning of the year,” he said.

“It’s a couple of fingers in the direction of the establishment.”

The Metropolitan Police said on Twitter that a dispersal order is in place for “a number of areas” across Westminster, including Parliament Square.

The force said: “Officers are engaging with those in Parliament Square and will be advising them of this order.”

In a separate tweet, the Met said: “A crowd in Parliament Square have been dangerously lighting fireworks and rockets.

“Some have struck people or exploded near to the crowd, this could cause very serious injury.

“We have moved into the crowd to remove any fireworks and prevent people coming to harm.”

Ahead of the demonstration, the force said officers would “work closely” with protest groups to “ensure gatherings are safe and disorder is minimised”.

“As a precaution, officers will be equipped with specialist public order uniforms and a number of protective barriers have been set up outside a number of locations in London,” it added.

Deputy Assistant Commissioner Jane Connors said ahead of the protest: “Groups of course have the right to protest.

“But I am particularly concerned that some groups are specifically intending to travel into London to deliberately cause violence and disorder including targeting police officers.

“This will not be tolerated and our policing plan has been developed with this potential risk in mind.

“Our patrols will be highly visible and we will be working closely throughout the operation with the City of London Police and the British Transport Police.”