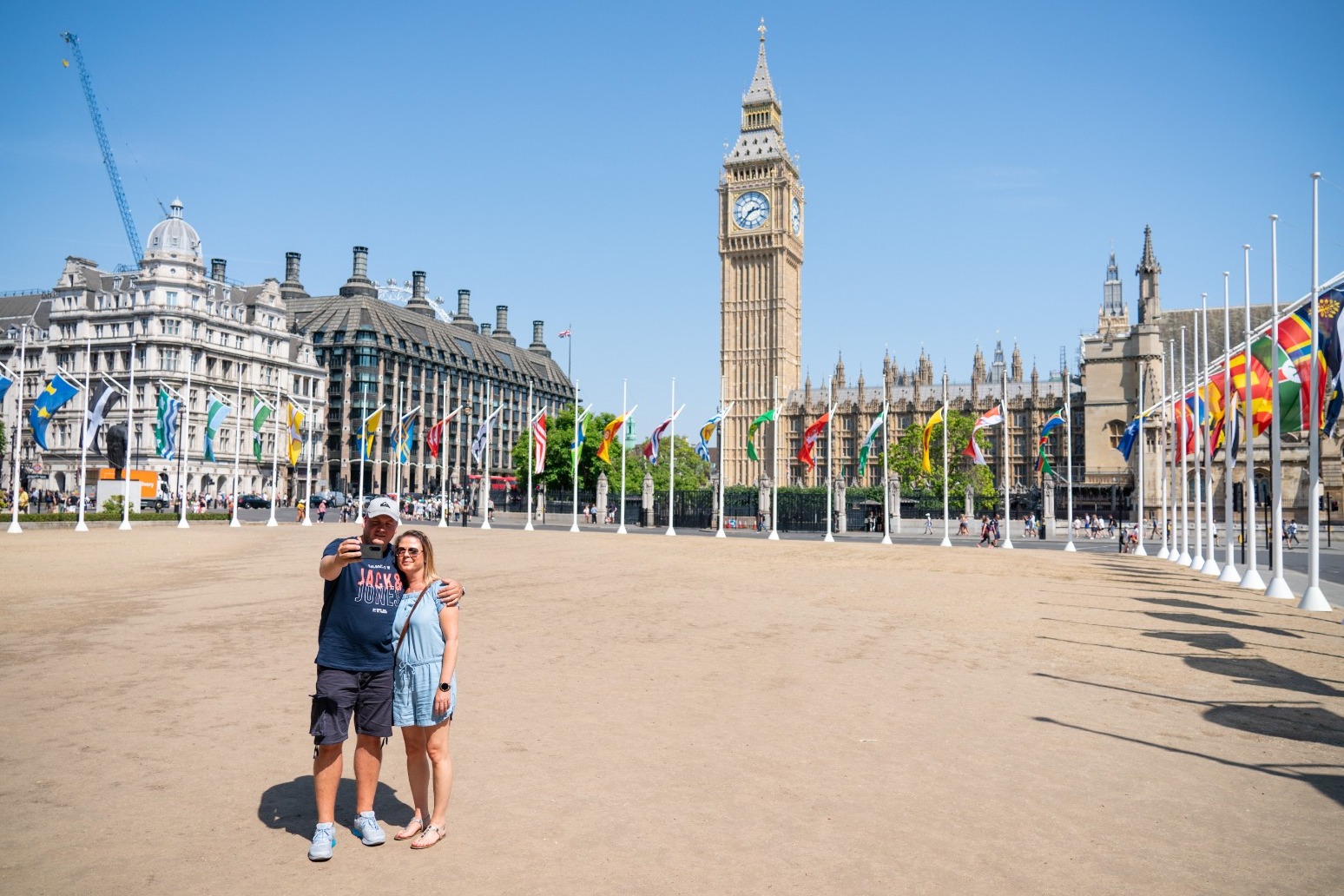 Temperatures have reached 40C for the first time on record in the UK, with 40.2C provisionally recorded at Heathrow Airport, according to the Met Office

The threshold was hit at 12.50pm as much of the UK sweltered in a heatwave, with parts of England and Wales under a red warning for extreme heat, posing a danger to life, pressure on the NHS and disruption across transport networks.

The extreme heat is fuelled by climate change, which is making every heatwave more intense, frequent and likely, scientists warn.

The new high for daytime temperatures came after the UK experienced its warmest night on record on Monday, with temperatures remaining in the mid-20s.

The 40.2C recorded at Heathrow beats the previous record for the UK of 38.7C in Cambridge three years ago, by 1.5C, and the Met Office warned temperatures were still climbing early on Tuesday afternoon.

Charlwood, Wisley and Chertsey in Surrey, and Kew Gardens and Northolt in west London were among the places to exceed the 2019 record by early afternoon, with temperatures climbing above 39C.

Rail services have been heavily disrupted, with no services into or out of London Kings Cross all day, no Thameslink or Great Northern trains north of London, and only very limited services on East Midlands Railway.

There are also very limited and disrupted services running into and out of London Euston, on Avanti West Coast and West Midlands Railway, and London Marylebone on Chiltern Railways, and temporary speed restrictions in the face of the risk of buckling rails.

Transport Secretary Grant Shapps conceded the UK’s transport network cannot cope with the extreme heat and said issues on the rails and roads will continue for decades during such heatwaves.

Congestion levels on city roads and commuter numbers on London public transport services were both down on Tuesday morning, suggesting people were heeding advice not to travel unnecessarily.

Britons have been urged to stay inside during the hottest period of the day, between 11am and 4pm, and wear sun cream and a hat, stay in the shade and keep hydrated with water – and there are warnings about swimming in open water.

A swimmer is missing at sea and five others were pulled from the water after a “serious” incident close to Clacton Pier, Essex Police said.

On Monday, the Metropolitan Police said a 14-year-old boy was missing and was believed to have drowned after getting into difficulty in the Thames in Richmond, west London.

Four other people have died in incidents in rivers, reservoirs and canals in the hot weather.

Two boys are in hospital – one of them in a critical condition – after being pulled from the sea at Blackpool on Monday, Lancashire police said.

In the health service, the interim deputy chief executive of NHS Providers, Miriam Deakin, said the heatwave was impacting urgent and emergency care and some planned services.

She said: “Across the country we are seeing hospitals having to scale back the number of planned surgeries as operating theatres are too hot.

“Trusts are having to install industrial cooling units, mounting fans, and trying to cool down IT server rooms.”

She said staff have swapped formal uniforms for cooler scrubs, while in some places those who are not frontline workers have been given the option to work from home, and hospital kitchens are making ice lollies for staff and patients.

Trusts are checking in with vulnerable patients to make sure they have enough water and plans to stay cool, and many clinical services have reviewed whether appointments or group activities should be cancelled or moved online, she said.

There have been 284,772 visits to the heat exhaustion and heatstroke section of the NHS website over the seven days from July 12 to 18, NHS Digital said.