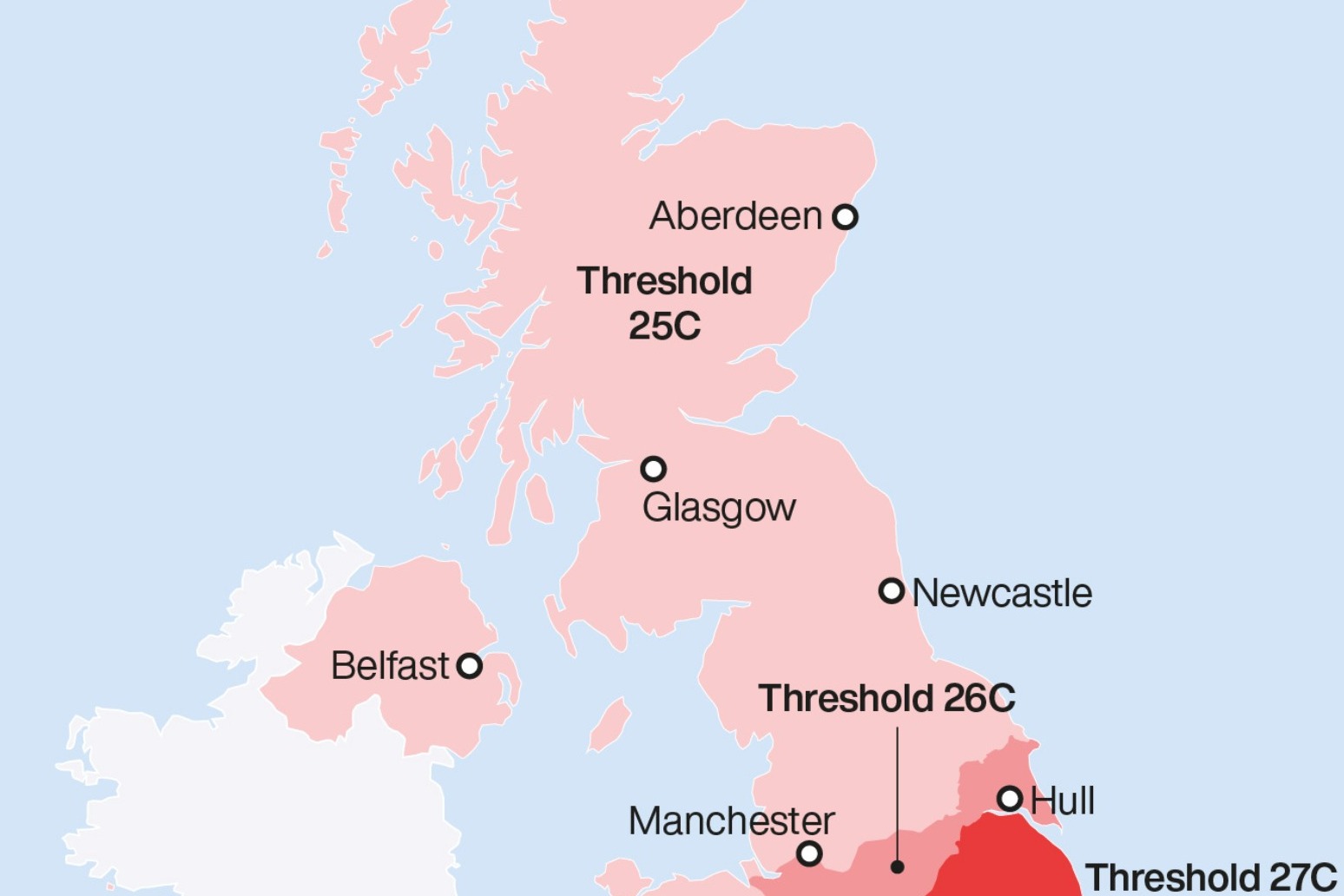 The Met Office and the UK Health Security Agency (UKHSA) have issued a heat-health alert warning ahead of rising temperatures predicted for later this week.

The forecaster said a level 2 heat-health alert has been issued for a large part of southern and central England, with a level 1 alert in place for northern England.

Forecasters have said some parts of England may experience a heatwave later this week as temperatures are predicted to jump to 28C (82F) in the North East and North West and 30C (86F) in the south east on Friday.

However, they have said that it is likely the heatwave will be short-lived.

On the four-level heat-health alert scale, which is designed to help healthcare workers manage through periods of extreme temperatures, level 1 is the lowest warning and is the minimum state of vigilance used during the summer months.

Level 2, called alert and readiness, is triggered as soon there is a 60% risk that temperature thresholds will be reached in one or more regions on at least two consecutive days and the intervening night.

A heatwave is defined as three consecutive days of with daily maximum temperatures meeting or exceeding the heatwave temperature threshold.

The threshold varies in each county.

Agostinho Sousa, head of extreme events and health protection at the UKHSA, said: “Temperatures are forecast to reach 30C in some parts of the south on Friday and we want everyone to enjoy the hot weather safely when it arrives and be aware of good health advice for coping with warmer conditions.

“During periods of hot weather it is especially important to keep checking on those who are most vulnerable, such as older people and those with heart or lung conditions.

“Make sure to look out for signs of heat exhaustion and follow our simple health advice to beat the heat.”

“Many areas will also see some warm nights with minimum temperatures expected to be in the high teens or even low 20Cs for some overnight,” he said.

“The heat is a result of a mix of home-grown warming in the day due to high pressure, as well as a southerly airflow introducing some of the warm air from the continent to UK shores.”

An Environment Agency spokesperson said there is a low-risk of drought but warned further hot, dry weather could put pressure on some areas.

The British Red Cross, meanwhile, has encouraged people to protect themselves and to check in with vulnerable friends, family and neighbours during the soaring temperatures.

The British Red Cross has given advice to help keep people healthy, including urging them to drink plenty of fluids but avoid excessive alcohol consumption, wear sun cream and keep workplaces and homes cool.