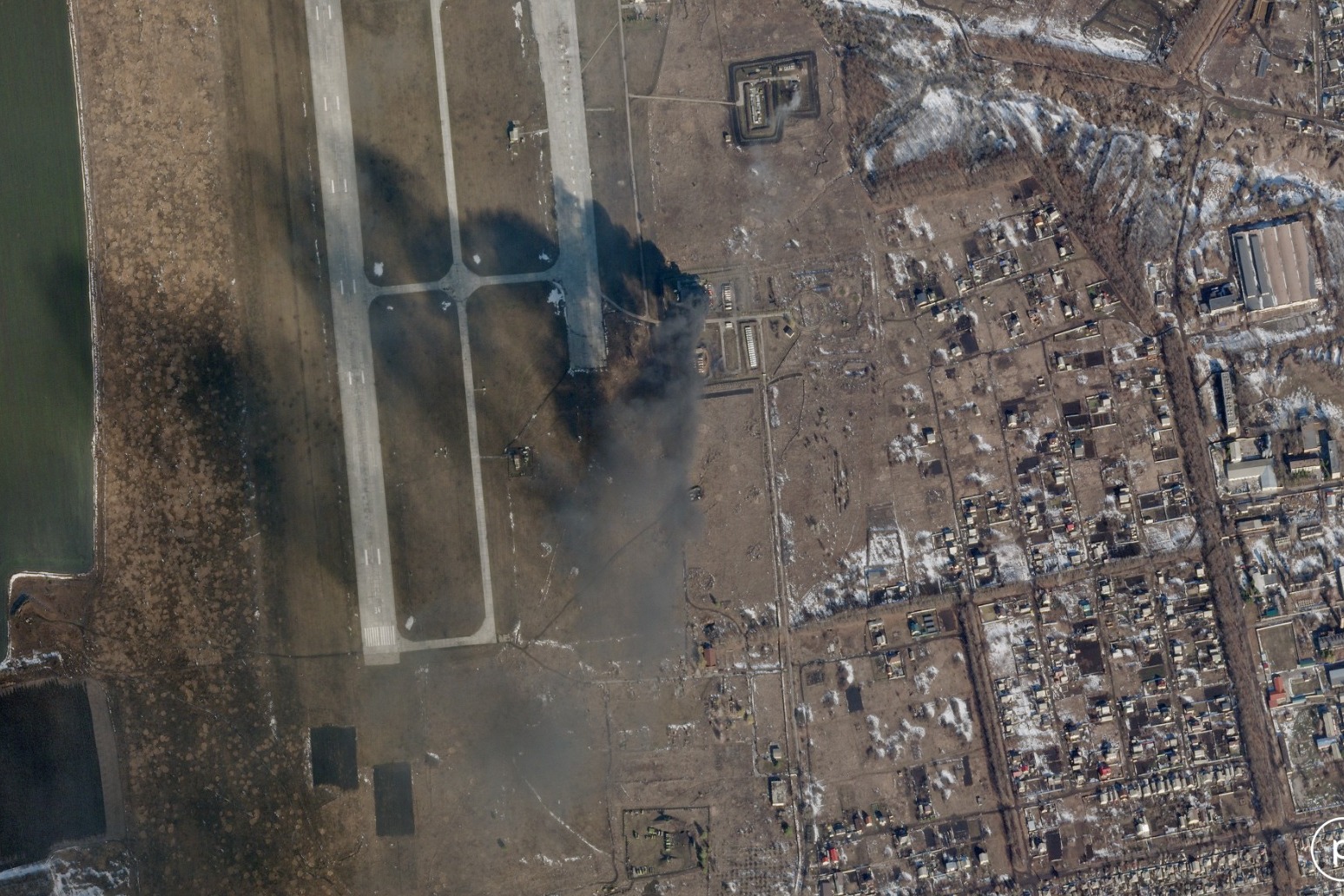 Ukrainian President Volodymyr Zelensky said his government has information that “subversive groups” were encroaching Kyiv as US secretary of state Antony Blinken said the city “could well be under siege”.

US defence secretary Lloyd Austin told politicians on a phone call that Russian mechanised forces that entered from Belarus were about 20 miles from Kyiv, according to a person familiar with the call.

Explosions sounded before dawn in Kyiv as Western leaders scheduled an emergency meeting and Mr Zelensky pleaded for international help.

The nature of the explosions was not immediately clear, but the blasts came amid signs that the capital and largest Ukrainian city was increasingly threatened following a day of fighting that left more than 100 Ukrainians dead.

“Nobody believed that this war would start and that they would take Kyiv directly,” said Anton Mironov, waiting out the night in one of the old Soviet metro stations. “I feel mostly fatigue. None of it feels real.”

And as air raid sirens sounded in Kyiv early Friday, guests of a hotel in the city centre were directed to a makeshift basement shelter, lined with piles of mattresses and bottles of water.

Workers, all local university students, served tea and biscuits to the guests.

“We’re all scared and worried. We don’t know what to do then, what’s going to happen in a few days,” said one of the workers, Lucy Vashaka, 20.

Mr Zelensky ordered a full military mobilisation to counter the Russian invasion which he said had led to 137 deaths.

In a decree issued late on Thursday, he said the the mobilisation would last 90 days.

He tasked the military’s general staff with determining the number of people eligible for service and the number of reservists as well as the order of the call-up.

He called those that had lost their lives in the invasion “heroes” and also said hundreds more have been wounded.

Mr Zelensky said that despite Russia’s claim it is attacking only military targets, civilian sites also have been struck.

In his words: “They’re killing people and turning peaceful cities into military targets. It’s foul and will never be forgiven.”

The UN Security Council will on Friday vote on a resolution that would condemn Russia’s military aggression against Ukraine “in the strongest terms” and demand an immediate halt to Russia’s invasion and the withdrawal of all Russian troops.

Russia earlier launched a wide-ranging attack on the eastern European country, hitting cities and bases with air strikes or shelling, as civilians piled into trains and cars to flee.

Ukraine’s government said Russian tanks and troops rolled across the border in a “full-scale war” that could rewrite the geopolitical order and whose fallout has already reverberated around the world.

The president said all border guards on Zmiinyi island in the Odesa region were killed on Thursday. Ukraine’s border guard service earlier in the day reported that the island was taken by the Russians.

Ukrainian officials said they had lost control of the Chernobyl nuclear site, where forces had waged a fierce battle with Russian troops and there are concerns staff have been taken hostage

The White House has said the reports of hostages are “credible”.

Ukrainian forces were battling other troops just miles from Kyiv for control of a strategic airport.

In unleashing Moscow’s most aggressive action since the Soviet invasion of Afghanistan in 1979, President Vladimir Putin deflected global condemnation and cascading new sanctions – and chillingly referred to his country’s nuclear arsenal.

He threatened any foreign country attempting to interfere with “consequences you have never seen”.

Large explosions were heard in the capital and in other cities on the first day of the invasion, and people massed in train stations and took to roads, as the government said the former Soviet republic was seeing a long-anticipated invasion from the east, north and south.

The chief of the Nato alliance said the “brutal act of war” shattered peace in Europe, joining a chorus of world leaders who decried the attack, which could cause massive casualties, topple Ukraine’s democratically elected government and upend the post-Cold War security order.

Condemnation rained down not only from the US and Europe, but from South Korea, Australia and beyond – and many governments readied new sanctions.

Even friendly leaders such as Hungary’s Viktor Orban sought to distance themselves from Mr Putin.

“As of today, our countries are on different sides of world history,” Mr Zelensky tweeted.

“Russia has embarked on a path of evil, but Ukraine is defending itself and won’t give up its freedom.”

His adviser Mykhailo Podolyak said: “A full-scale war in Europe has begun… Russia is not only attacking Ukraine, but the rules of normal life in the modern world.”

While some nervous Europeans speculated about a possible new world war, the US and its Nato partners have so far shown no indication they would join in a war against Russia.

They instead mobilised troops and equipment around Ukraine’s western flank – as Ukraine pleaded for defence assistance and help protecting its airspace.