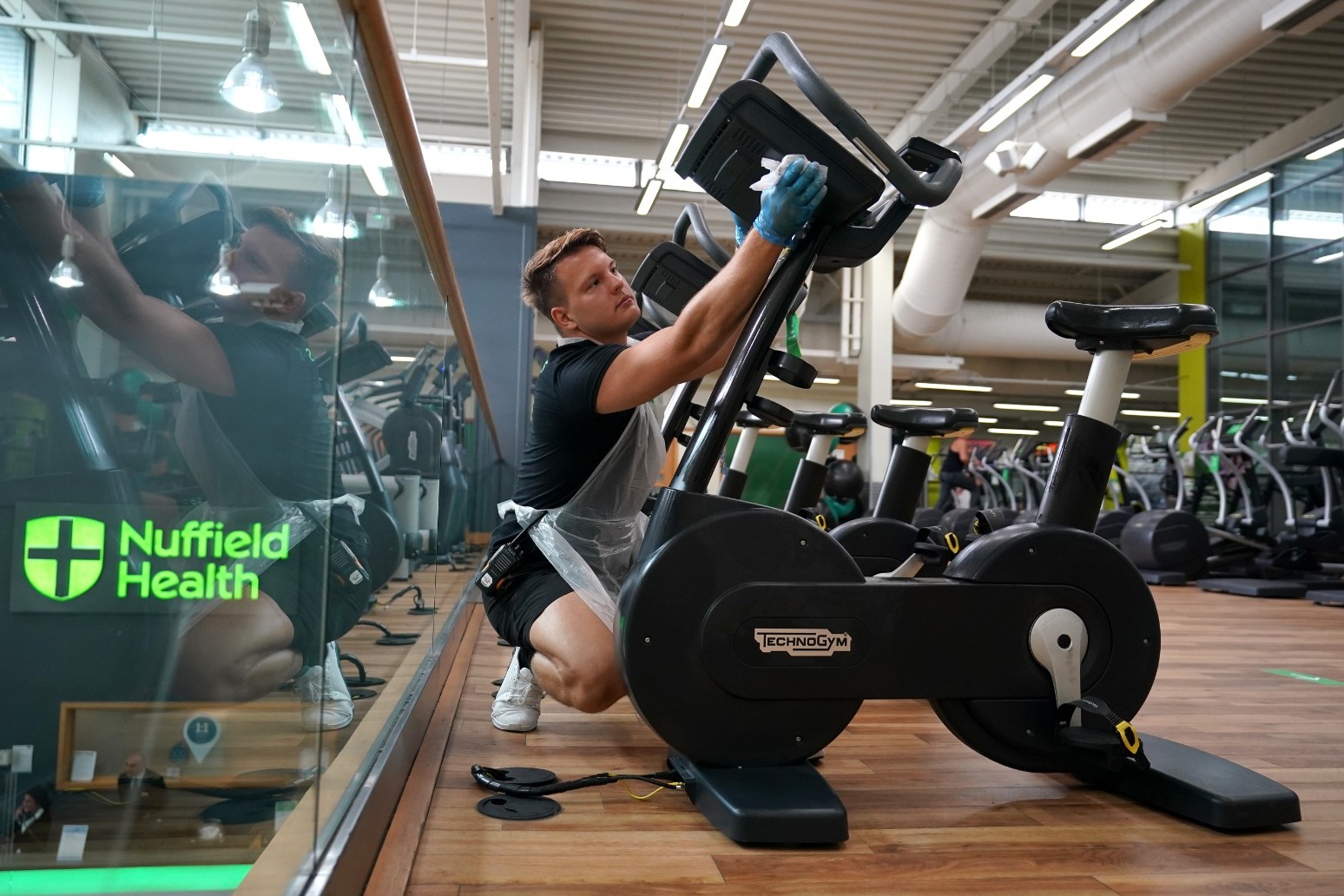 The nation could be facing a collapse in its health and leisure infrastructure as pools and gyms were allowed to open their doors.

Only around 20% of pools in England will be opening on Saturday, the head of the national governing body for swimming said, with thousands potentially shutting up shop unless the Government intervenes.

Jane Nickerson, chief executive of Swim England, said that even before Covid-19 struck 40% of the country’s ageing pool stock was facing closure before the end of the decade.

She said many local facilities have had no support at all over the last three months.

“So a little bit of support now from the Government will have its payback within months.

“It is not like it’s asking for money that just gets thrown away – by tackling the health and obesity crisis in the pool, it actually saves a lot of money.”

She added: “One of our biggest, biggest fears is that there will be a lost generation of children this year who don’t learn to swim.”

Ms Nickerson’s fears are shared by Community Leisure UK, the members’ association that specialises in representing charitable leisure and culture trusts across England, Scotland and Wales.

It estimates as many as 1,300 public leisure facilities could disappear by the end of the year, along with more than 58,000 jobs.

The gloomy predictions came as eager gym goers worked up a sweat on Saturday morning.

Fitness chain David Lloyd clubs opened the doors of its branch in Hampton, Twickenham, at exactly midnight on Saturday to hold what is believed to be the first post-lockdown indoor exercise class.

As well as the chance to take part in a “Blitz” HIIT (high intensity interval training) class, those who had patiently queued were also given free rein of the facilities in the early hours of the morning.

Elsewhere, the Aquabatics sunchronised swimming team were happy to be back in the water at the London Aquatic Centre at the Queen Elizabeth Olympic Park in London.

In Hexham, Northumberland, people were queuing from 8am to enter a gym and pool facility.

Local resident Peter Topping told the PA news agency: “We were queuing outside for just a few minutes, and the staff briefed people while we were waiting.

“It was brilliant to be back, but hard work after four months off.”

He said they managed social distancing well, with a separate entrance and exit for gym goers.

On Friday, the Government revealed it is preparing plans to tackle obesity as part of its strategy to minimise the impact of future waves of Covid-19.

It said it would be revealing its obesity strategy “very soon” after a Public Health England (PHE) review found a dramatic rise in the risk of hospitalisation and death from coronavirus.

It marks a U-turn for Boris Johnson, who up until recently has been a vocal opponent of “sin taxes” and perceived “nannying” by the state.

Expected new measures include junk food adverts being banned on television before the 9pm watershed and outlawed entirely online.

Other rumoured announcements include restrictions on promotions on sugary snacks and restaurants and takeaways being forced to publish the calorie count of the food they serve.

The new commitment to tackle obesity comes just a year after the Prime Minister vowed to review “sin taxes”, such as the proposal to extend the sugar tax to milkshakes.

He has admitted his own experience of Covid-19, which led to him being admitted to intensive care in April, convinced him of the need for change.

The study concluded that people who are overweight, with a body mass index (BMI) of 25 to 29.9, have a higher risk of hospitalisation and poor outcomes if they catch coronavirus.

Experts also discovered that having a BMI of 35 to 40 increases the risk of death from coronavirus by 40%, while a BMI over 40 almost doubles the risk compared to people who are a healthy weight.

On Friday, the PM said he had lost more than a stone since his battle with Covid-19.

The PHE study pointed out that snack food and alcohol supermarket sales have risen, possibly reflecting the fact shops, pubs and cafes were closed during lockdown and people turned to snacking and drinking at home.

During the first six months of this year, alcohol sales were up 30% on the same period last year, while confectionery sales were up 20% and foods for sweet home cooking rose 22%, the PHE report said.

Meanwhile, a survey of more than 2,000 people for the Food Standards Agency in May found that people were cooking more from scratch – but were also snacking on cakes, biscuits, confectionery and savoury snacks more often.

Dr Alison Tedstone, chief nutritionist at PHE, said: “The case for action on obesity has never been stronger.”