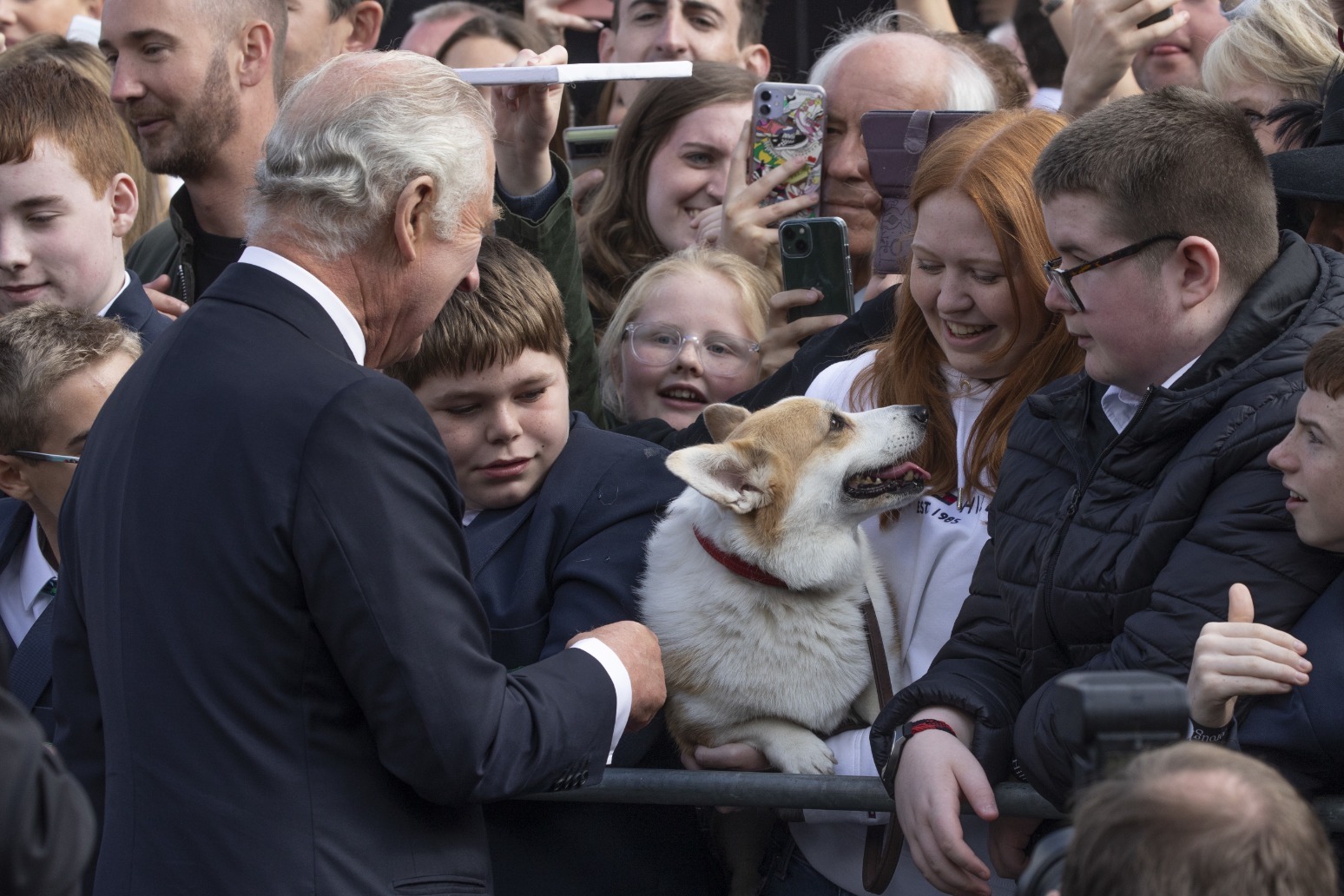 In addition to the UK, the King is head of state for 14 Commonwealth realms – but the monarchy’s future role in some of these countries appears less certain after the Queen’s death.

In November 2021, Barbados became a republic, replacing the monarch with a president as head of state, and there has since been speculation that other countries, such as Jamaica, could follow suit.

The future role of the monarchy in these realms is likely to come under renewed scrutiny following the death of the Queen, and after controversies surrounding royal trips to Caribbean countries by the new Prince and Princess of Wales and the Earl and Countess of Wessex in March and April, respectively.

William and Kate’s royal trip in March to Belize, Jamaica and the Bahamas was criticised over allegedly “tone deaf” images, which critics claimed were reminiscent of colonial days.

The controversial photos showed the couple, then known as the Duke and Duchess of Cambridge, shaking hands with Kingston crowds behind a mesh wire fence, and riding in the back of a Land Rover.

Belize locals also claimed they were not consulted about a royal engagement, and the couple were met with calls for slavery reparations from the monarchy in Jamaica.

Meanwhile, Edward and Sophie also faced calls for reparations during their tour of Antigua and Barbuda, St Lucia, and St Vincent and the Grenadines in April.

Here is what some of the Commonwealth realms have said about their future links to the monarchy:

A spokesperson for the Prime Minister of the Bahamas Philip Davis said a republic referendum “is not an agenda item of this administration at this time”.

In a statement, Clint Watson, press secretary at the office of the Prime Minister of the Bahamas, told the PA news agency: “The Bahamas is in a period of mourning. Our focus is on the death of the Queen, and her legacy and our gratitude for her service. We also welcome the new sovereign, King Charles III.

“Prime Minister Davis told reporters that any discussion must lead to a referendum of the people deciding as our constitution requires this.

“This is not an agenda item of this administration at this time.”

In March, William signalled any decision by Belize, Jamaica and the Bahamas to break away from the British monarchy and become republics would be supported with “pride and respect” by the UK.

The prime minister of Antigua and Barbuda Gaston Browne said following the Queen’s death that he will call for a referendum on the country becoming a republic within three years.

Despite signing a document ratifying Charles’s status as the new King, Mr Browne said he would push for a republic referendum, telling ITV: “This is not an act of hostility or any difference between Antigua and Barbuda and the monarchy, but it is the final step to complete that circle of independence, to ensure that we are truly a sovereign nation.”

Asked for a timeframe on the referendum, he said: “I’d say probably within the next three years.”

Mr Browne in April called on the Wessexes to use their “diplomatic influence” to achieve “reparatory justice”, and outlined his country’s wish to “one day become a republic”.

Edward was criticised as “arrogant” for joking that he had not been taking notes during Mr Browne’s comments.

New Zealand’s Prime Minister Jacinda Ardern has said her government will not pursue becoming a republic following the death of the Queen.

But she has speculated that the constitutional change was “likely” to happen within her “lifetime”.

According to the Associated Press, Ms Ardern said: “There’s been a debate, probably for a number of years.

“It’s just the pace, and how widely that debate is occurring. I’ve made my view plain many times. I do believe that is where New Zealand will head, in time. I believe it is likely to occur in my lifetime.

“But I don’t see it as a short-term measure or anything that is on the agenda any time soon.”

Australian Prime Minister Anthony Albanese has said “now is not a time” to discuss the country becoming a republic following the Queen’s death, but he has not ruled out a future referendum on the issue.

Mr Albanese, a republican, appeared to be paving the way for an Australian republic vote after he was elected in May, appointing Matt Thistlethwaite to a newly created post, assistant minister for the republic, in June.

But the prime minister has said a republic referendum is not a priority for his first three-year term in government.

“Now is not a time to talk about our system of government,” he told the Australian Broadcasting Corporation on Sunday.

“Now is the time for us to pay tribute to the life of Queen Elizabeth, a life well lived, a life of dedication and loyalty including to the Australian people and for us to honour and grieve.”

Canada’s Prime Minister Justin Trudeau has said “we also look to the future” with King Charles III, suggesting it will continue as a constitutional monarchy for the foreseeable future.

In a Twitter post, Mr Trudeau said: “While we continue to mourn the loss of Canada’s longest-reigning sovereign, Her Majesty Queen Elizabeth II, we also look to the future with the proclamation of the accession of His Majesty King Charles III as Sovereign of Canada.”

During William and Kate’s Caribbean tour in March, Jamaica’s Prime Minister Andrew Holness suggested to the couple that his country may follow Barbados in becoming a republic.

Mr Holness told the couple, now the Prince and Princess of Wales, Jamaica was “moving on” and intended to “fulfil our true ambitions and destiny as an independent, developed, prosperous country”.

Friday’s front page of The Gleaner, a Jamaican newspaper, carried a story headlined “Queen’s death end of an era”, with a sub headline adding “Scholar believes (the Queen’s) passing will make Jamaica’s break with the monarchy easier”.

The Independent has reported the Jamaican government has already begun the process to transition to a republic, with an official appointed to oversee the work.

A few days after William and Kate left Belize following their tour in March, Henry Charles Usher, minister for constitutional and political reform, reportedly told Belize’s parliament: “Perhaps it is time for Belize to take the next step in truly owning our independence. But it is a matter that the people of Belize must decide on.”

Tahira Carter, press secretary in the Prime Minister’s Office in Grenada, told PA: “The Government of Grenada has no immediate plans to change its constitutional status.

“The move to become a republic is a natural progression that the country may pursue in the future, however.”

In June, Arley Gill, chairman of Grenada’s National Reparations Committee, told the i newspaper, that Charles becoming King could lead to a republican backlash, saying: “I think it would.”

He told the i: “I don’t think the Grenadian people are too enthused about Prince Charles.

“I don’t think the Prince will get a huge welcome when he ascends to the throne. I don’t think we are of that ilk.”

Papua New Guinea is among a host of realms to have already proclaimed King Charles III as their new head of state.

At a ceremony also honouring the late Queen, Prime Minister James Marape said: “In reflection of the life she lived, the exemplary performance of duties as the head of the state of Papua New Guinea, it is in this connection that we all gather here this morning to acknowledge her passing and to acknowledge and witness the ascension of the throne of King Charles III,” the Associated Press reported.

Savali Amasone Fatoga, deputy secretary, office of the Prime Minister in Tuvalu, told PA: “At this stage I cannot share much with you as we still have the Queen’s representative in Tuvalu ‘the governor general’.

“We may still continue with King Charles III as head of state, and for a referendum to take place, that will be the Government of the day’s call.”

It is unclear what will happen in some of the other realms following the Queen’s death.